This session took place in the School of Music at the University of Leeds on September 20th. The glass we had made in Frome was annealed and ready for use, so we were eager to examine the new pieces properly under light, and to work with some musicians on possible interpretations. We also invited photographer Michael Coldwell to capture images of the projections, and videographer Angela Guyton to create a short video (see below) about the project from our interaction with the musicians.

The opening part of the day was our now familiar process of setting up. This fascinates me [Scott] every time we do it because there’s no formula, it always takes an hour of subtle repositioning of glass, light, and screens before we start to settle on usable images. While we definitely get a better feel for it each time, it never gets quicker or easier. It’s definitely less frustrating than previous sessions since we’ve accepted this, so it now feels like a gentle ritual of greeting the material, getting to know it afresh each time: a ‘dance of agency’ as Andrew Pickering would have it.

As the projections started to come together, photographer Mick Coldwell arrived to make take some shots. The conditions of the piece make it especially tricky to shoot, since the caustics have a huge dynamic range from subtle shadow through to blinding glare. Mick has perfected techniques to capture the beautiful detail of the images and not lose either the luminescence or the ombra. 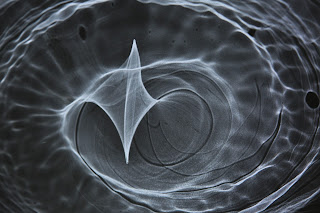 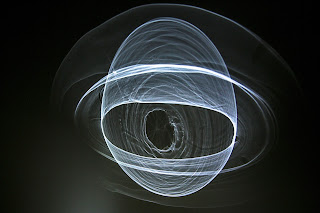 While we had done much productive work with musicians Dom Lash and Seth Woods before, we decided for this session to see what would happen if we brought in some players who were completely fresh to the project, and without leading them with too much explanation of what we might want sonically. The intention here was also to allow ourselves a re-imagining of the soundworld to inform our next performance with Dom and other musicians. This fresh start was especially interesting for me (Scott) since I was slowly beginning to relax my idea of what this project should sound like. Previous performances had been driven conceptually by the analogy between spectral splitting of light (caustics) and spectral splitting of sound, which is central to my own composition research. This resulted in pieces not too dissimilar (sonically at least) from my other compositions of recent years. The spectral analogy still stands, but for this session I only generally described the structural aspects of the images that we felt were musically important, without providing much guidance how they should be mapped in performance.

The two musicians were Harley Johnson (piano), and Ben Palmer (clarinet), both are wonderfully open-minded; happy to jump-in and try different approaches, and to actively reflect on these choices after each take. We had a very productive hour of trials and discussions, with each player taking turns to play for 4–5 minutes with different images, before moving onto some group improvisations. Scott also joined in for a version with Harley and himself playing piano together (see below).

It was very interesting to watch the different approaches of the two players, both solo and as a group. Harley is an experienced improviser and tended to use the image as a springboard for improvisation. His initial solo readings worked through a variety of approaches (different textures and piano material) in a block-like structure that managed to retain a connection to the visual while changing the mapping every couple of minutes: each individual block felt ‘right’ (some more than others of course) but there was always a period of adjustment each time the approach changed. Ben’s background is in notated music (with some idiomatic improvisation), and this was clear from his preference to ‘read’ the image directly. Ben’s different performances varied between minimal approaches where a single pitch or multiphonic was altered along with the slow rotation of the image, and more varied approaches where several musical objects were tested. Ben also had a preference for isolating specific aspects or sections of the image as ‘score’, where Harley preferred treating it holistically. It was especially fascinating to watch both players test and discard ideas that seemed like overly literal mappings, searching for the sweet spot of interpretations that are rich enough to have a life of their own — being more than just imitations in a another medium — but not so rich as to have no discernible relation but the purely metaphorical — where the visual and sounding are mediated by an arbitrary meaning that only has relevance personal to the player.

One result of this session for me was that for future performances we should use both ‘section’ scores and full image score. A ‘section’ score is where we put a small glass plate near the projection to isolate a small section of the whole. The plate is sandblasted to ‘frost’ it, allowing it to hold the image and be visible from both sides. The ‘section’ score allows us to isolate specific figures or textures from the whole to act as score, so there is less varied information for the musician to have to decide between, and they can focus their interpretation more.

Later in the session with did some duets and a trio. The players were now more familiar with the material, and what would work for them as techniques, but still the group improvisations tended to add a second ‘attractor’ that reduced the influence of the score somewhat. The two players discussed how were working with/against each other as well as the score, reacting to and colouring each other’s interpretations: in the long run there will emerge an ebb and flow to this that should most likely begin to favour the score more as they play together more and know each other better. For the final piece of the session I wanted to try out a specific idea that had occurred to me, to play the piano spectrally by repeating a single low pitch while Harley sat by the piano strings and used his fingertips on the strings to isolate harmonics. This formed a spectral basis that all three of us could improvise around, while still led by the score. I added upper pitches that balanced or contrasted with Harley’s harmonics (and additional sounds), while Ben added other spectral pitches and multiphonics, again in contrast or complement as the image suggested. This is an interesting approach that might merit more research, but it also revealed for me — now that I had moved on from my strict relation of this piece to my other works — that inherent difficulties of working with such a complex visual, further convincing me of the need to reduce the scope of the visual to facilitate interpretation.

Angie's video captures some of this discussion wonderfully, and frames it with our our observations.


It was also very pleasing for me to see Shelley engage directly with the musicians and ask them to try different approaches. The new independence of the project has perhaps given her permission to have more ownership of the music, in the same way that my working with glass allowed me to take more direct control of the glass objects. Next step is to get Shelley an instrument!