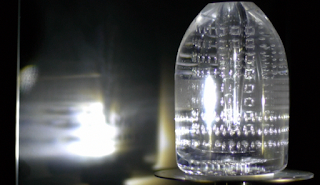 For me [Scott], the central connection between the glass/sound is the analogy between the spectral caustics of the glass, and the spectral splitting of sound. My own compositional practice takes this spectral listening as a basic pre-requisite, allowing me to find new and fascinating ways of working with acoustic instruments to bring out this splitting.

For the uninitiated, spectral listening to sound involves listening 'inside' the sound to hear its structure, the motion of its relative parts. This is not easy to do in most music we're surrounded with because the motion of notes and different instrumental timbres captures our attention, but when presented with single sustained sounds it is easier to focus on their internal structure. A simple example is to listen to a drone (a single sustained note) for a long time.

As an example of music that already take advantage of some sort of spectral listening. In traditional throat singing of Tuva/Mongolia, the singer drones a low pitch and makes subtle changes of mouth shape make it resonate strongly on specific harmonics, which they can then manipulate into a tune: you hear a low note and also a whistle-like tune. Here’s an example from outside the traditional context.

Bells and other inharmonic metal percussion don’t have the same harmonic structure as other musical sounds (see harmonic series below) so it’s often easy to listen past the main pitch and hear other pitches in the bell’s spectrum: bell-makers use terms such as ‘strike note’, ‘hum note’ etc. to differentiate these. See here for a detailed explanation.

Spectral Structure: All musical sounds contain harmonics, each with their own distinct pitches arranged in a sequence called the harmonic series; notably except metal percussion which is ‘inharmonic’.  The pitch that we hear is called the fundamental, and its harmonics are called partials, but we hear all of these partials as being fused together in a single pitch. In the example below, we would hear the bass pitch C on the far left, but that note also contains all the other partials, some louder than others, if we listen into the note it's possible to hear some of these partials.

Here's a brief explanation video showing a realtime spectral analysis of my voice as I sing a drone and change vowel-shape, which changes the spectrum.

Here's an image and video below of a french horn solo as a spectrogram: Marie-Luise Neunecker playing an excerpt from the end of the french horn solo in Britten's 'Serenade'. Unlike my voice example, here time passes on the x-axis (left-to-right) and the partials/frequency are represented on the y-axis, low-to-high. Each note is a series of lines, with the lowest being the fundamental and the upper partials becoming more faint as they get quieter: loud notes are dark, and have more dark lines showing strong partials in their spectrum. 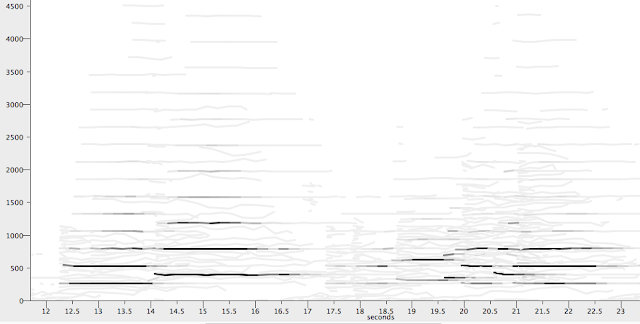 In most of my music, I use acoustic instruments played in ways that focus the acoustic energy of the sound away from the fundamental, to create a harmony from the partials; either on their own as harmonics, or in more ambiguous formats where individual partials bleed through the overall sound. This example below is from a solo violin piece — The endless mobility of listening (2016) performed by Mira Benjamin — where the violin's open G string is played as a drone, but with changes of bow speed/pressure that bring out partials. The spectrogram is of the same file, and looks as ambiguous as it sounds. Notably, the fundamental 'G' at 196Hz is practically invisible on this spectrogram, with all the energy pooling into other partials, most notably the 3rd and 6th (both sounding as 'D'), and sometimes the 7th (a slightly flat 'F'). However, we still hear ‘G’ overall because the brain condenses the harmonic series into a single pitch percept: this is why spectral listening takes time, you have to work around the brain’s tendency to reduce to one pitch.

In some of my work on this project, I've looked to make a performance where the shifting patterns of light caustics from the glass become a score played by splitting the sound of acoustic instruments to bring out partials. The light is energy in a caustic is similarly split, and pools in specific resonances that cause bright curves and lines. The question in our project is how to meaningfully map this for musicians such that (a) it's not completely prescriptive, allowing some indeterminacy and complexity, but equally (b) it's not simply free improvisation along to beautiful visuals. There must be some connection and some freedom. From the other perspective, the project hopes to build a grammar from glass and light that allows us some consistency in structuring the music. We have some great results so far, looking forward to more exploration!

Scott and I [Shelley] had spent hours on the phone and by email together, dreaming about all the things we would do with this grant. With the wonderful news that we had been selected, we started planning in earnest – how could we make the very most of this unique chance to explore our common fascination with coded structure or grain without compromising our very different creative practices, - and do all that within a limited time and budget?  And would the process of analysing and describing this creative friendship quench the spontaneity, the spark that has fuelled our work so far?


As I swam up and down my local pool pondering these questions, I remembered an inspiring conversation with a leading authority on pianolas, Rex Lawson, who had, by chance, visited my studio during the Open Studio event at Cockpit Art in June with his wife. Perhaps the coded materiality of the pianola roll might be a useful common ground. And perhaps the rich and distinctive symmetry of a Bach Fugue would provide a framework for the creation and arrangement of the glass pieces.


I was also worried about how we might analyse and interpret the projections themselves- to move beyond a simple metaphor (‘bright = loud’) to offer a more sophisticated link between the optical and acoustic phenomena. Another connection, this time from my Bristol psychology network bubbled into view. The physicist Sir Michael Berry is an old friend of my PhD supervisor, Priscilla Heard and we had met with his wife for tea two years ago. He seemed as fascinated as I with the caustics created by the glass objects and several hours flew by as we toured his rambling house with torches peeping into darkened rooms filled with experiments. Perhaps he would be willing to help.


Scott seemed excited by the idea and we agreed to make a start. I contacted Rex who was traveling and unable to help with the Bach piece in time for our first workshop. Scott found a section of a roll of a Beethoven piece and sent over a series of scans- we both instantly liked the patterns in ‘page 4’ so I imported this segment to a 3d modelling programme to recreate the original grid, borrowed a desktop plotter / cutter from a friend to create the stencils and sandblasted a series of tests on different types of glass – a borosilicate drawn tube, a mold-pressed kilner jar, panels of window glass and mirror.

I loaded a backpack and set off to meet Scott in the sunlit plaza in front of Huddersfield station. A wonderful warm evening with Scott’s wife and daughter set the scene for an incredibly productive day in Leeds.


We started with the ‘Principles of Collaboration’ exercise over strong coffee and slabs of cake, delighted and relieved to find that, rather than dulling our enthusiasm, the exercises reinforced our confidence and got us thinking about new ideas.


Back to the music department to set up the lights and the glass and to meet Mick, a hugely talented Leeds-based PhD student in Moving Image that Scott had invited to work with us to document the project, particularly taking still shots of the glass objects themselves. He was instantly engaged, pulling out his camera to begin work and making excellent suggestions – the results are wonderful. We’ve asked him to help us with filming performances too. It’s great to have him on the team.