What an incredible week – two inspiring meetings with two very different men – one an artist, the other a scientist - and yet so similar in their passion and depth of knowledge – and both so generous with their time and expertise.

Rex and his wife Rhona welcomed my intern Sila and I [Shelley] in their rambling house in Bromley. 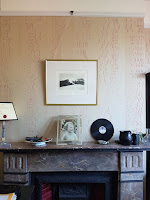 We walked through the sunlit garden into a cavernous studio packed to the rafters with boxes of pianola rolls and presses and ancient computers to find Rex playing a grand pianola at full tilt – the piece that he played for their wedding exactly 12 years ago. 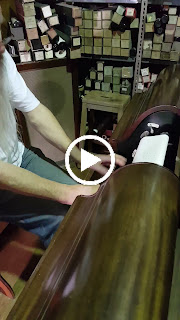 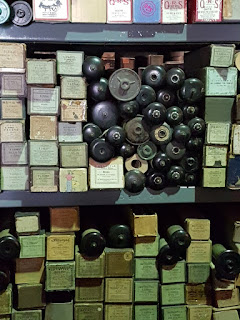 Rex explained how the design of the rolls evolved from 64 to 82 holes to allow for more sophisticated coding, and the difference between the European-style round holes and the American squares. He showed us how the additional lines and dots that I had seen in photographs online are used by the player as a guide for tempo and dynamics and demonstrated the surprising degree of freedom that the player can exert on the way the piece is ‘played’ by the machine. 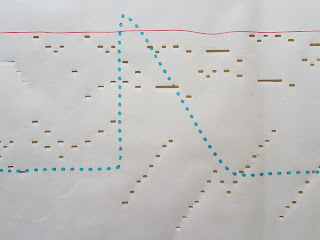 Stravinsky, among other composers, personally supervised the notation and frontispieces for their new works. A stylised phoenix was the logo for one of the most influential publishers, the Aeolian Company. Rex has adopted this for the home page of his own remarkable software that allows him to design new rolls and cut them himself. He demonstrated the process for us, firing up an extraordinary machine with multiple pulleys and levers and a clattering array of hole punching bits.


I had not realised that the whole pianola mechanism is essentially a set of air pipes – the holes release the vacuum and collapse a small set of bellows. This movement in turn releases a hammer which strikes the keyboard of the piano placed behind the pianola mechanism.

We chose Bach's Fugue no.2 in C minor from the first book of the Well Tempered Clavier. The recurring triplets of the central theme are coded as a distinctive triangular pattern that dances through the piece.

We left the Lawson household with warm agreement to meet again. Rex will join us for the glassblowing session in Frome in September.

In the meantime, I will send him images of the work as it progresses.


The second meeting was very different but equally memorable – I had met Michael Berry through my PhD supervisor several years ago. We had spent a wonderful afternoon at his house in Clifton discussing glass and caustics and he had kindly agreed to help in future projects.

I was delighted that he was able to spend an afternoon with us when he is so much in demand. We all met at Trowbridge rail station and went to a glassblowing studio run by two very talented young glass makers nearby. Neither Michael nor Scott had ever seen the process at close quarters before and seemed to find it fascinating despite the heat.  James made some Prince Rupert’s drops for Michael and showed us their new coldworking space before we went to a pub by the canal in Bradford upon Avon to continue the conversation.


I had tried to read anything I could find on the internet about Caustics before meeting Michael but had become hopelessly confused. With his patient explanation, it all became perfectly clear – and brought Scott and my work into sharp focus.

Until now, we had been shining light through a revolving object. This generated rich and complex patterns of light and shade especially when combined with the reflections generated by the polished facets.

This was the heart of our original proposal– to understand these phenomena to the point where we could direct and refine this luminous vocabulary with greater creative intent.

As Michael explained, caustics are the patterns of light and shade that are generated by a stream of photons interacting with small changes in the angle of a shiny surface. These undulations essentially operate as mini-lenses, focusing the beam to produce rich networks of curves and points.
The relationship between the scale of the topography and the size of the beam is critical to the effect: a small beam such as a laser pointer will be deflected by very small undulations, a large light source such as an LED lamp will be deflected by larger-scale effects. In both cases, a parallel beam is critical so that a stream of photons strikes the glass from the same direction. A spreading or diffuse beam will create spreading and diffuse effects.

We realised that in order to find the clarity and control we were seeking, we should begin with flat rather than curved surfaces. Rather than looking at the projections created by shining light through the piece, the solution lay in the reflections.

We talked until it was time to get the train home – about parallels between waves and rays of light and sound, the power of prime numbers and the principle of natural beauty.

Michael kindly agreed to continue to advise us as the project progressed.

I was so delighted to get back to the studio to run some experiments with mouth-blown plates with sandblasted patterns to see whether we needed to silver the surface - and it seems that we don't need to after all, .

With Michael’s advice on the light source, have started to get some exciting results.

On August 17th we made a trip to Trowbridge to discuss our project with Professor Sir Michael Berry, a physicist who specialises in caustics, the optical phenomena central to our project.

After meeting up with Michael, the day began with a session watching glassblowers at work; something I [Scott] had never seen first-hand, despite working with a glass artist for over a year. We spent an hour at the Devereux & Huskie Glassworks Studio — friends of Shelley’s — and watched them make a beautiful piece of layered blown glass. The process especially fascinated me for its materiality and intense performativity. The three artists worked together to keep the glass at the correct temperature for optimum malleability, and to keep several kilos of molten glass in constant and even rotation to stop it sliding off the blowing pipe. All of this while continuously shaping and pressing the glass into a unique and elegant form. 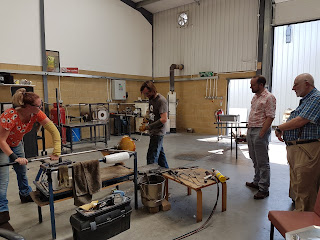 We also had some fun watching James and Katie make some ‘Prince Rupert’s Drops’ for Michael.
After this we went for lunch with Michael to chat about our project, especially the nature of the caustic light phenomena, and their relationship to spectral behaviour in sound.

Michael is Emeritus Professor of Physics at the University of Bristol. He specialises in the mathematics of light focussing, specifically caustics, phenomena that lie in the 'borderlands between physical theories — between classical and quantum, between rays and waves.' If you’d like the details, Michael’s website hosts his many papers that explain the complex maths behind these phenomena. However, for non-mathematicians, he describes caustics simply as the ‘spectacular patterns of wave interference associated with focusing’: common examples can be seen in the shimmering patterns of light on the bottom of swimming pools and clear streams. This older paper of Michael’s explains the phenomena very clearly, and here’s a beautiful example of a cusp caustic in very fine detail (from Michael's site), and a diagram of caustic formation (from paper cited above). 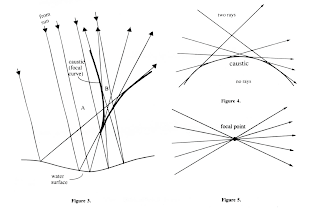 Talking with Michael changed the way we think about some of our project, or if that's too radical, the conversation at least provided us with another way of thinking about our materials. The primary point for me was that it's possible to generate caustics that are more 'pure' (see below) by removing the refractive aspect of the glass from the equation.  'Pure' here means an image that is only the caustic rays, avoiding multiplying of the image by glass refraction and internal reflections. This is not necessarily the best approach for the project goal of developing a visual grammar for a graphic score, but it certainly provides another aspect to that grammar, another voice.

The simplest way to do this within our project is to use silvered glass, this allows us to reflect directly off the silver and allowing the curving of the glass to generate the caustic focussing. We can then also contrast that against caustics generated by shining light through the glass, wherein the cording of the glass multiplies and distorts the caustics. Both of these cases provide rich visuals with clearly identifiable elements

A second new element is to trying using laser light as well as white light. Our previous performances have used tightly focussed white light, which gave us good results, but seeing Michael's work with lasers has convinced us to try this approach as well. I've done some experiments using a simple laser pointer, with good results. The patterns from laser light are slightly different (apart from the very obvious difference that they're bright red...) but I haven't yet become familiar enough with them to properly define the different quality: watch this space... Here's an example:


As well as these direct impacts on the project, it was also fascinating to talk to Michael about aspects of chaos theory in his work, as this had a strong influence on my PhD work. I hope to have the chance to chat to him again as the project goes on.