Gallery page for the gig is here. Video quality is not great but there's an excerpt below.

For this gig I came up with some new ways to think about the scoring. After the Leeds and Huddersfield workshops in November I had a complete re-think of how to approach guiding the players' interpretation, and sonifying the moving structures of light. 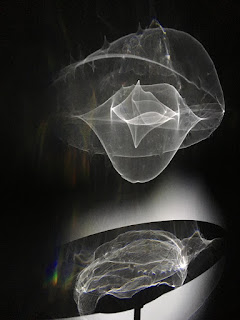 As a way of providing some measure of unity to the available pitch-space, all three of us tuned to scordaturas based on natural harmonics of the bass E string, and all the pieces use only open strings or natural harmonics: I only played on the final piece, all the other pieces are vln/bass.

The compositional strategy began with an idea that I took from the Huddersfield sessions, to focus the players on a single point on the screen, and interpret the light that flows across that point. This places helpful limits on what the players have to take in, and allows some interesting fuzzy mappings to be made. It's also not as one-dimensional as the description sounds since the players can see what is approaching their reading 'point', but the nature of the rotating glass shapes means that movement is not always linear, with approaching shapes often folding back on themselves unpredictably. This provides a greater measure of nuance and performativity than simply reading a changing dark/light state.

The first piece took its starting point from John Lely's The Harmonics of Real Strings; a piece which exposes harmonics sequentially as the finger very slowly moves along the string. In my piece, both players begin at arbitrary harmonics on their D-string (though tuned to 7th partial of low E) and use the light score to guide them to move between harmonics on that string. The simple poles of the mapping are that bright light should pull them towards a strong and pure harmonic tone, while darkness should be string noise with minimal specific pitch. Of course there are a huge range of possible shades and textures that pass across the score, as equally as there are a wonderful range of sounds between the pure and the noisy. I was especially interested in the metastable states that arose when the light edged towards a pure brightness but never quite arrived, constantly skirting fringes of light and prisming that come out in sound as multiphonics or strong overtones shadowing the harmonic. The players were also instructed to choose freely how far or fast they would traverse the string, sometimes going back on themselves to get back to a strong harmonic. The overall piece lasted three revolutions (c.7min/rev.) of the glass, each one on a different string.

The second and third pieces were more free-form. Piece-2 was very minimal, with both players sustaining a single harmonic, and altering that with gentle changes in response only to the variation of a certain shape on a rotating disc of light: see the poster image here for the 'spikes' that arise from bubbles on the glass surface. Piece-3 was a ’toccata’ of sorts. A constant pulse is maintained between the players, with pitch being similar between them in bright sections, and more strongly differentiated in darker areas. The players also freely changed timbre and dynamic in response to variation of light/shape/texture.

For the final piece I joined in on feedback guitar; using a 'sustainiac' to achieve very quiet feedback and vary the feedback tones on the string. In this piece we took a drone approach on open G#-strings, varying between 'dark' muffled tones, and brighter tones where many higher partials could emerge as well as more complex harmonies. The final section brought me back to shoegaze roots (obliquely) with intense double-stopped drones on E-G# strings.


2-minute excerpt from the final piece at Hundred Years Gallery.

For this performance I was blessed with a large open space, and lots of time. This gave me the opportunity to fine-tune the light (glass-position etc.) and to use multiple surfaces. A simple screen allowed me a detailed projection, while a second lamp gave a large (if slightly fuzzy) projection on the back wall: I also experimented with a close-up frosted-glass score but this was less useful.

For performance, it was just myself with a prepared cello. I took the same approaches as we had used in the Hundred Years Gallery. I placed a small dot on the screen to orient myself, and applied different rulesets to each performance that mapped the properties of the visuals onto playing techniques and properties of the instrument or musical materials. 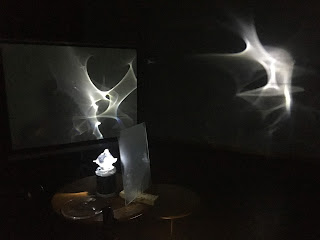 The cello preparations worked wonderfully with the light-scores. The preparations make the string inharmonic, and break the usually predictable string tone into several overlapping spectra that compete with each other. This gives the sound a fragility and alien complexity that matches the textures of the light caustics. The cello tone develops fringes of strange overtones which can be pushed and pulled along with the shifting light textures: this is similar to something that Seth woods also experimented with back in our earliest workshops on this project with his custom mutes. As a performer, the complex shapes of the light can be explored by allowing the string multiphonics to emerge and interact. I'm more coaxing the sounds from the cello and following their lead than controlling them specifically. 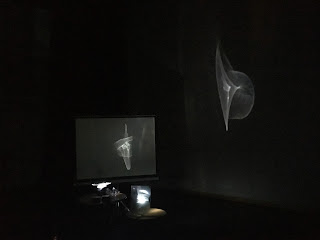 For 2017 we have some plans for a large-scale version in Leeds with CAVE, using multiple glass scores and musicians in a large space, and exploring difference and repetition across the multiples. Watch this space!